I have now pressed the button on my D800E around 7500 times, and this is eating storage at an alarming rate.  Each NEF (raw) file with lossless compression (ie compression that does not lose any data as opposed to fractal compression algorithms like jpeg) weighs in at 40MB.  So every 25 shots is a Gigabyte.  The original 1TB drive inside my Dell XPS 8500 was fast filling up, and my old  500GB backup disk is now full.  I’ve also started using Photoshop more which means I save a .tiff file – at 600MB+ a time with layers intact, or 150MB flattened – more often than I used to.

A storage uplift was called for.  I could install a NAS box with a RAID array in it.  In fact I already have a Linux server with a 1TB RAID-1 mirror, however I don’t like the abstraction away from the file-system.   I know from long experience that the more you complicate the resilience around storage, the harder it is to recover your files in the event of a disaster.  If the NAS box dies – will the new RAID/NAS box understand the array layout from the previous manufacturer’s box that is now smoking in the corner?  Can you just mount the disks in a regular PC and extract the files?  Maybe – but to be blunt, I’d rather not do maybe.  See Scott Kelby’s adventures with his Drobo NAS boxes. 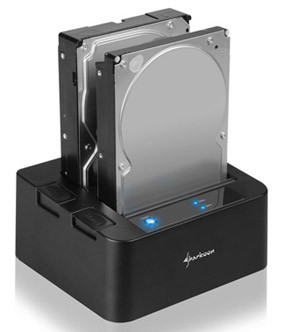 So I have added a 3TB drive to my PC, and have a further two 3TB drives for backup.  I connect them to my PC via a device made by Sharkoon that looks like a toaster.  You insert a bare SATA drive in the top and talk to it via USB.  Bare drives as removable media.  Marvellous – a 3TB pen drive.  The Sharkoon Quickport Duo has – wait for it, yes that’s right  2 drive slots.  I back-up the images and Lightroom catalogue to both of these drives using Robocopy.  It may be basic, but I see the files on each disk, and can mount the disk on any PC that has a USB port and can talk NTFS.    One drive then goes with me to the office, where I keep it in my desk drawer.  After a major influx of pictures I backup again to the remaining drive, take this to the office and bring the other one home and backup to that too.

In this way I have an onsite and offsite backup, that can be restored to any device that can mount and read an NTFS volume and it all happens at USB 3 speed.  No need for dropboxes, clouds, or any of that impractical nonsense (who on earth is going to store hundreds of 40Mb NEFs and 600MB tiffs on Internet storage at the end of the wet piece of 4Mb/s string that is my ADSL? ).

Lightroom took an age to shift the files across, and left a bit of a mess on the old drive, however it did work and this is the only practical way to move your catalogue – you need to drag and drop the folders in the Lightroom catalogue module.  If you move them outside of Lightroom, you’re into a whole world of pain trying to re-unite images with the pointers in Lightroom’s SQLlite database.    I have decided to leave the catalogue and thumbnails/previews on the original disk.  Lightroom has to access the SQLlite based catalogue at the same time as the image data files so having them on separate physical disks may provide some performance gains:  the read/write heads on a disk can only be in once place at any time, and multiple IO operations requiring writing to the catalogue and reading data from a raw file mean a lot of going back and forth between 2 locations on the disk if they are both on the same physical drive.

Think twice before you buy a camera with lots of pixels – you will need storage to match, not to mention processing power and memory in your PC/Mac to work on the files.  One other curious side effect was that the tools were all too small in Photoshop CS2 – especially the Liquify tool.   So I also had to upgrade to CS6 to get 4000px wide brushes, and blur radii bigger than 250px…