No – not people from agencies – little models of cars.   Automotive shooters reckon you need a soft-box at least twice as big as the car to get great clean looking light on a car, which is basically a big convex shiny thing that reflects everything for miles around.  Who has a 20 ft soft-box?  hands-up?  Nobody?  Anyone get a car sized studio space with a diffusion panel under the roof?  No? 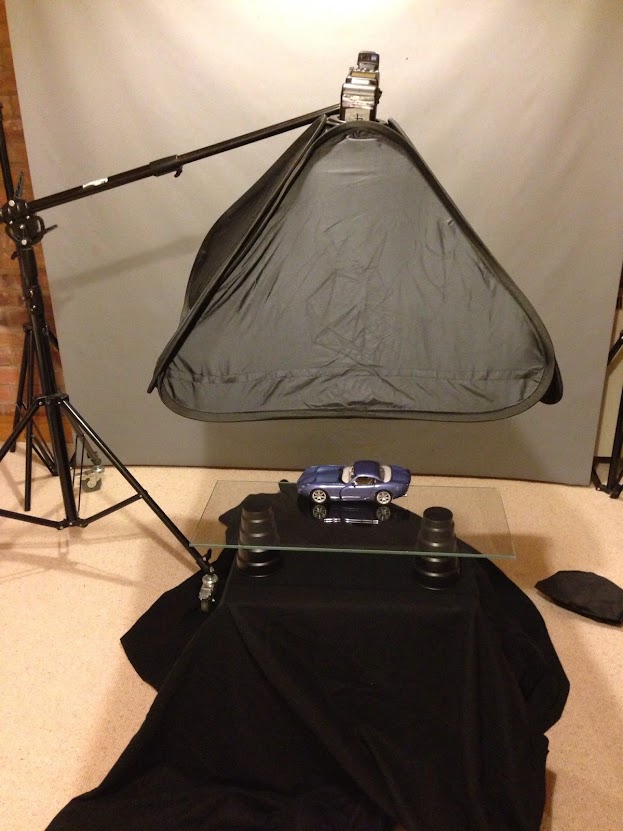 Well luckily in the equation soft-box = 2 x Car, there are two variables.  If you can’t get a huge soft-box, get a small car.

Not too small mind.  I think this one is 1:18 scale and has lots of fine detail.  It’s lit by one speed-light in an 80cm pop-up soft-box from Meking Studios in Shanghai.  These are great value at around £30.

Shoot the car from far away  and dead level.  The background goes black as it is very far from the light compared to the car to light distance.  The light intensity is inversely proportional to the square of the distance, so twice as far, it’s a quarter of the brightness.  Or put another way it halves twice.  Or… and this is easiest to remember – 2 x the distance:  light drops 2 stops – easy!  Black is about 3 stops from mid-grey so this easily turns black.  I had the light on manual for this, and metered from just at the roof level of the car using a hand-held incident meter.

The car is standing a piece of toughened glass  (actually a glass shelf from B&Q) to lose the light hitting the “ground” using the same principle.  The light goes through the glass and is lost in the void underneath.  I covered the stand in black cloth just to make sure.

Now the fun part – move the soft-box back and forth and take shots.  You only need to move it an inch to make a big difference at this scale.  I had the car just under the leading edge o the box to get the shot above.  Use manual focus on the live view screen if you have it.  Zoom the screen to 100% and adjust the focus.  Lock the mirror up, wait and take the shot at a small aperture, but not so small that diffraction starts to soften the image.  I took this shot at f/8 on my D800E.   Any smaller aperture setting and diffraction will begin.

There are a number of things that can give away the result as a model – dust was a big problem and despite constant dusting, blowing, vacc’ing etc, I still had some work to do with the clone tool in PS later.  However, this shot still convinced most people on flickr for a couple of days.  before, that is, my friend Anthony Holloway pointed out that the steering wheel was out of focus.  Yep, the DOF is lower here than a full size car.  The *only* thing that determines DOF is the physical size of the aperture:  i.e. the hole the light shines through.  The larger the aperture, the lower the DOF.  To shoot a full size car from 10 feet away I would be using a 24mm lens, which means at f/8, my aperture would be 3mm in diameter.  To get this model to fill the frame at the same distance, I was using a Nikkor 180mm lens at f/8 so my aperture was 22.5mm wide.  Big difference.