Made the annual pilgrimage to the NEC last Sunday.  Very quiet:  there was no queue on he M42, no queue to get into the car park either, and room to actually walk between the stands.  Quite a few big names missing.  Jacobs of course, who went to the wall last year.  Some new faces including Hasselblad and many familiar faces.  Was good to see Garry Edwardes on the Lencarta stand and their amazing new SF300 and SF600 high-speed IGBT based lights (basically big mains powered speedlights) with mind boggling 0.8 second recycle times at full power, and 1/20,000th of a second flash duration at minimum power on the SF300.  I’ll be buying one of those as soon as they come into stock in the next few weeks.

Frank Doorhof was on The Flash Centre stand demonstrating his approach to lighting and getting some amazing pictures with Maisy.  Here he is, having just blown Maisy away with the new point-and-destroy feature on the Sony Alpha 99….. 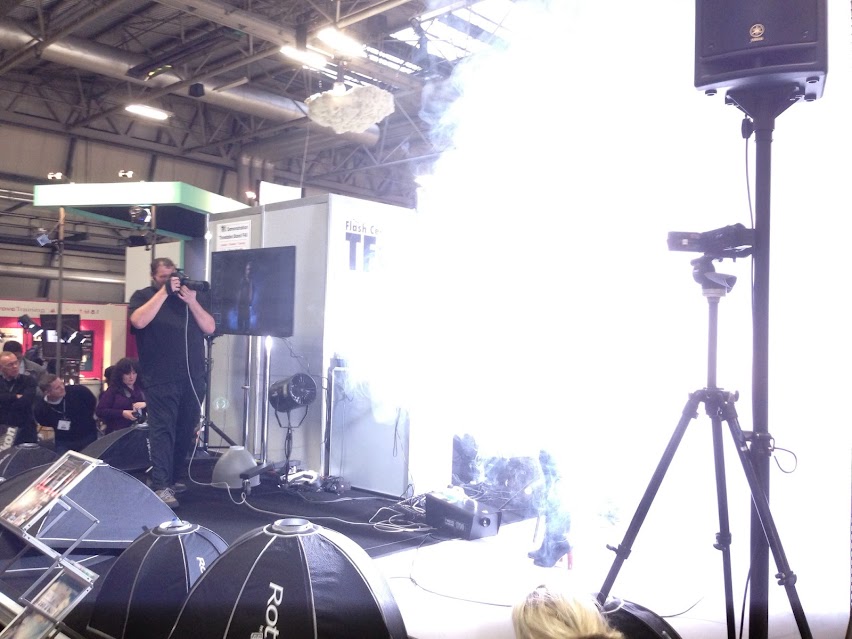 It as great to talk to Frank after the show – I learnt the basics of how to light and meter from Frank’s videos on Kelby Training.

Did a bit of shopping:  bought a Lumiquest LTP softbox.  I like the Lumiquest design as it folds flat in seconds and fits in my camera bag.  I have also ordered a similar looking one from Hong Kong via eBay for £4.65 inc postage.  It’s rude not to at that price and I’m curious to see how they stack up as the Lumiquest one is £45.  Also bought a 1.2m Octobox from Bessel – with a difference.  I’ve already got a 1.2m Octa, however it takes a twenty minute wrestling match to put it up.  This new one, opens like an umbrella, and took me less than 2 minutes to construct, and 40 seconds to take down again, including attaching both diffusers and the grid.  Marvelous.  added to my clamp collection whilst at Bessel as well – can never have enough speedlight clamps, poles, and other light holding gear.